Water treatment for domestic and industrial use

UV water treatment for domestic or industrial use

UV radiation is generally divided into the areas of UVA, UVB, UVC and UVC vacuum. UV radiation has a shorter wavelength and more energy than visible light. While UVA and UVB from the solar spectrum partially penetrate the Earth’s atmosphere, UVC (100-300nm) is completely filtered into the stratosphere. That’s why life, which uses an unstable UVC molecule (DNA) for coding, was able to develop on Earth. Radiation below 200nm is completely suppressed by the emitter’s special quartz blend.

Radiation below 200nm is completely suppressed by the emitter’s special quartz mixture. By the term UVC disinfection, it therefore does not bond the entire range of 100-300nm, but particularly the range around 260nm, where the DNA is most sensitive. 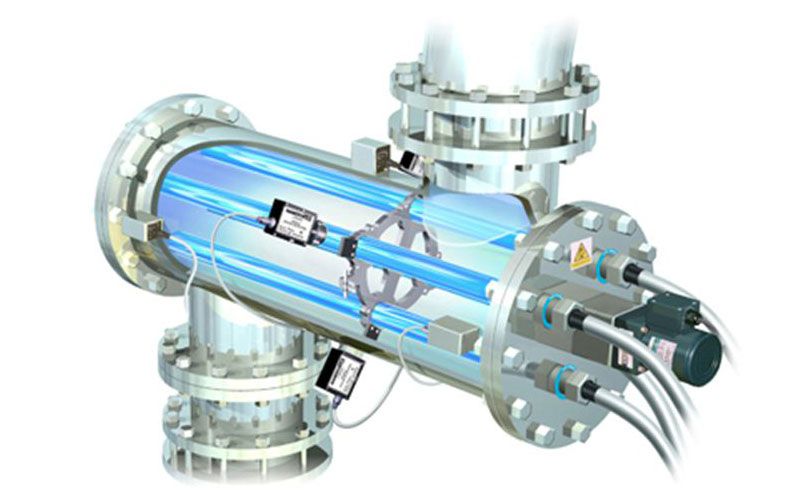 An analysis of the disinfection level of UVC between the wavelengths of 200 and 300nm (yellow line) shows the highest efficiency between 240-280nm with a maximum at 260nm. If you compare the absorption spectrum of the genetic material (DNA, blue line), you see an almost identical course. The more UVC is absorbed by the DNA, the more it is destroyed – the disinfection level increases.

UVC disinfection tubes give off most of their radiation precisely at 253.7nm (purple bar), the maximum amount of DNA destruction. About 30% of the electrical energy is delivered at low pressure radiators at this wavelength, hence this technique is especially efficient. There are hardly any ancillary spectra that would be critical to material compatibility.

In general, all forms of life on Earth are organized based on DNA or RNA which is similarly constructed. This means any organism can be damaged by UVC radiation. The simpler the form of organization and the smaller the cell volume of the various organisms, the more effective the kill rate is through UVC. The dose at which 90% of organisms of a species is killed, it is called LD90 dose. To kill simple bacteria generally requires between 1.5 and 6 mJ/cm2, for larger yeasts with nucleus, between 6-10 mJ/cm2 and for fungal spores that are made for survival in extreme environments, it may take even 20 to a maximum of 120 mJ/cm2 to kill 90%.

Within the groups of organisms there are also differences because of dyes in the cell walls and the type of DNA packaging. Extensive tables and literature exist listing the LD90 doses of different species for the calculation of disinfection doses. The presentation and the density of the microorganisms is also important for the design of disinfection systems, because shading, reflection and dispersion affect the dose with which the UVC radiation can reach the DNA. Another important factor for the required LD90 dose, and thus the success of the UVC disinfection, is the cell cycle of the organisms. Cells with high protein synthesis, as is necessary during the cell division, are damaged significantly faster because the DNA is extracted and thus easier to reach for the UVC radiation.

Water treatment for domestic & industrial use